Again this week a major Fullers ferry has been taken out of service for some unknown reason: passengers don't need to know why or how long, we just need to keep stumping up, keep our mouths shut and be grateful there is a ferry service at all, what with Infratil being kept busy with chasing Auckland Airport directorships.

So we now have endure rides on that crowd favourite, the Vomit Comet, sorry, Jet Raider. Not that it would matter much if only they could get rid of the diesel fumes above and the toilet stink below the waterline. But the constant lateness of the damn thing is what riles most passengers.
Fullers has been posting notices around patronizingly warning passengers that their ferry won't wait for them at departure. Unfortunately there is no same guarantee offered it will ever arrive on scheduled time and the Jet Raider is always 15 to 25 minutes late.
In the UK, public transport operators get fined or their licence withdrawn if their services are habitually late. Why can't we have a similar system here? It would certainly them where it hurts and make haste of regular maintenance and upgrades.
Posted by Hans Versluys No comments:

News from a public transport system that works:

"Qantas intended spending $10 million on introducing its Cityflyer brand, which now operates between the six main Australian centres, to New Zealand. That would include:
* A $3 million upgrade of domestic club lounges in Auckland, Wellington and Christchurch.
* Refurbishing aircraft cabins.
* Self-serve check-in kiosks at airports.
* An enhanced free food service and morning newspapers.
* A free bar service from 4pm on weekdays."

While I read that, sitting on a wind and rain-swept Auckland ferry Pier 2, I can't but marvel with envy at how the free airline market caters for its passengers. Imagine what ferry travel would be like if there were Qantas ferries competing with Infratil for customers. We'd be pampered with Koru club style waiting facilities instead of wino hangouts; have refurbished ferries that don't stink of diesel and freshly pumped out sewage; ferries that might actually arrive on time instead of patronizing warnings that ferries will not wait for you; and all for prices that can go down instead of always up.
(I'm only using the ferry as an analogy, the same is of course true for bus and train services)

Come on, Qantas/Pacific Blue/AirNZ, branch out into our transport mode and give a heave to bad and expensive service.

Why is the ARTA negligent in its job for it guarantees the present monopoly gouging to continue? And how do we get rid of it?

My point is that the lack of competition is the direct cause of bad and overpriced service on ferries. 1,000 commuting passengers a day is a large market - how many plane routes or bus lines carry that many people twice a day in New Zealand?
Virgin runs planes and trains in the UK, so multiple transport modes can be run by one company (Infratil runs buses, ferries and airports!) - hell, they could even offer "frequent flyer points" applicable to all their transport modes.

Booking seats on ferries in advance would be quite handy and those advance sales are attractive for traveler and company alike, as it does for planes and the Naked Bus Co. It would force Fullers to actually deliver a reliable and attractive service instead of the guaranteed monopoly they enjoy now.
Imagine if you could book your daily commute bus seat: no more standing room only and the driver knows where to pick up his booked passengers. Guaranteed filled seats and regular income - perhaps even without a public subsidy. Everybody would be better off with some lateral thinking and free market innovation.

There would be nothing wrong with cut price peak services and extra charges for extra services like a Koru Club or free drinks. It would offer passengers choice. Now the only choice we have is a stinking Jet Raider at first class fares.
Posted by Hans Versluys No comments:

Email ThisBlogThis!Share to TwitterShare to FacebookShare to Pinterest
Labels: monopoly 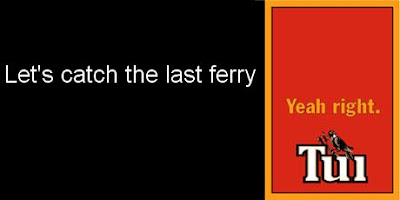