Fullers apologises to its Waiheke customers

I found an A5-sized pamphlet on the ferry headed "Customer Announcement: An Apology to Our Waiheke Customers". I can't find it on their website to link to, so I'll paraphrase. It says they had a larger number than expected vessels out of service due to what they call "unplanned maintenance", a euphemism for engine breakdown. Planned maintenance on Adventurer had to be delayed due to the Rugby World Cup and its unusually busy period (didn't they know this event was coming?).

Then for some statistics: in the past 3 years, 13 out of 20 engines have been rebuilt or replaced (several boats have two engines, it's not as if Fullers have a secret fleet stashed away somewhere) at a cost of over $4 million. Regardless, the "unusually high breakdown rates" indicate to me either bad engineering skills or patch-up work to keep costs down in the short term (but of course not in the long term, as any business 101 course will tell you).
But happily we can look forward to the triumphant return of Superflyte on the 6:30pm ex-Auckland sailing (after a spate of sardine-like conditions lately), and Doug Hudson is looking forward to your comments. Leave your feedback here.

You really have to be stupid not to think that the point of catastrophic breakdown of the ferry system in Auckland, i.e. when there are simply not enough vessels to meet the demand, is not far off and that the company is derelict in its investment plans for new capacity. The tragedy is that there is simply no mechanism or regulation in place to ensure that Waiheke is not economically strangled by this private profiteering monopoly company.
Posted by Hans Versluys 2 comments: 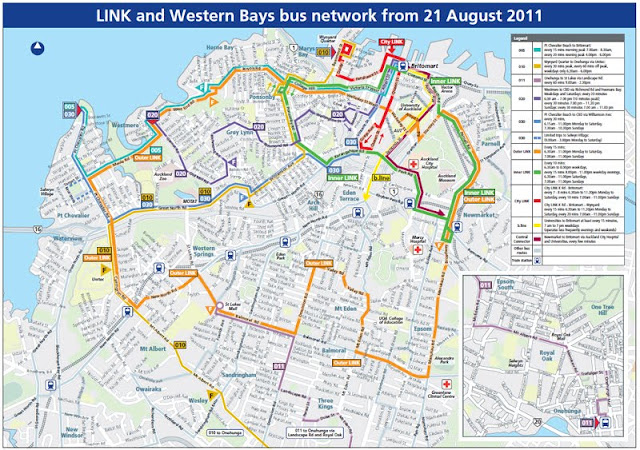 I found myself inadvertently catching the Outer Link bus from Pt Chevalier to Balmoral (the southern part of the route) and then the next day from Balmoral to the CBD. It's a brand new line with brand new buses so I was glad to try it out. There was no waiting time at the Pt Chev bus stop, the bus had arrived there before I did, so all good. The frequency stated by Maxx is about every 15mins, which I guess in Auckland's bus system is not bad at all - especially on the weekend. It chugged along happily but at frequent intervals there was an announcement that the bus may be waiting a few minutes at some bus stops to prevent it getting too much out of whack with its timetable. This makes for a very slow frustrating progress. It took about 40mins to get from Pt Chev to Balmoral and about 30mins to get to downtown. If you're in Balmoral, it may be faster to catch a Mt Eden bus route.
As you can see in the route diagram, there are some curious "kinks" in the route, i.e. where deviations into side streets happen instead of going straight through. Why there is this lengthy detour through Mt Eden to end up again on Balmoral Road is a mystery to me. Hardly anyone got off or on in that deviation, and it just added to the travel time.
Being a Saturday, I thought it was very well patronised, and best of all, it's free for Waiheke Fullers monthly pass holders (as are the other Link services).
Posted by Hans Versluys No comments:

The afternoon started ominously with a txt message from Fullers advising that the 17:00 and 18:30 ex-Auckland would be run by Jet Raider. My last experience on that boat didn't end well so I was dreading the worst for getting home in any reasonable amount of time. And again, Fullers didn't disappoint in that department. Superflyte was doing the normal Quickcat services, as Quickcat was chartered for a party on the harbour cruise: the seats were piled high on the wharf to make way for dancing punters. Fullers, being a fully private company unbeholden to its daily paying customers, has the right to take boats out of commuting service when it has the chance of making far more per charter passenger than from those pesky, complaining commuters.

At 18:00 came another txt advising that the 17:40 ex-Waiheke was cancelled (JR came back from Waiheke late and empty). The girl on the wharf tannoy tried to keep our spirits up by announcing the ferry was "about 10 minutes late". Of course Fullers time has no link to real time and we left 20mins late.

Of course, this being Friday and Summertime, the 18:30 sailing has to go via Devonport, come what may, being late or not, having crashed into the Devonport wharf before or not, Fullers' internal infernal route and timetabling has to be obeyed, and off we chugged to Waiheke.
Jet Raider was going suspiciously slow and we arrived about 19:45 at Matiatia, shortly followed by the 19:15 Superflyte. Again, Jet Raider left Waiheke empty. I innocently asked a staff member behind the bar why the boat went at half speed and she was offended by the suggestion that I noticed something like that. She was adamant the boat went full speed but was delayed by the number of passengers.
It's a sign capitalism is based on fear when you can get your employees on the minimum wage to lie and do your PR for you.
It doesn't bode well for the rest of the Summer, but we know our place and the live sheep shipments will blithely continue.

But a good thing that happened and kept the frustrated waiting punters' spirits up on Matiatia wharf was a flash mob carol singalong by V12 and Sister Shout: