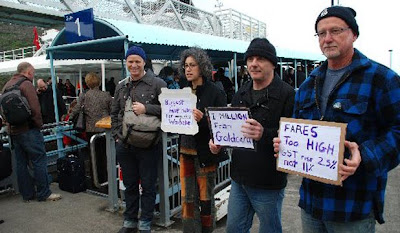 This morning a small contingent from the Campaign 4 Fair Ferry Fares protested the 1 October fare rises by Fullers at the Matiatia wharf. Waiheke Board candidate Ewen Sutherland (right) joined the protest and Waitemata Council candidate Alex Swney (not pictured) looked on in sympathy. A Waiheke Marketplace journalist was in attendance.
The NZ Herald picked up on the issue too. Pity they swallowed Fullers' spin wholesale.

Mike Lee's vision for the future of Fullers

Outgoing ARC Chairman Mike Lee is running for the Waitemata Council seat on the new Auckland Council. He has outlined his vision for the future of Fullers on his campaign blog:

Another concern which the island should be debating is our ferry services. Despite relatively high fares the island has had in general pretty good service from Fullers, the company founded by the visionary George Hudson in the 1980s. However with the long periods out of service of the QuickCat, SuperFlyte, the realisation is dawning that along with the Jet Raider these vessels are now past the expected economic life of a ship. And given that the recent owners’ (Infratil and now Scotland-based Brian Souter) main objective has been to extract as much profit from the Waiheke run as possible, there are no signs of interest in investing the significant amount of money needed to buy new ferries to cater for Waiheke’s needs for the next 20 years or so.

This should be a major concern for Waihekeans. We have some choices. We could lobby the Auckland Council and request that the new Auckland Transport Agency buys out Mr Souter and takes over Fullers. Or failing that we should think about as a community buying a new vessel ourselves. The new vessel or vessels could be owned by a Waiheke residents’ Trust and could even be run by a management company in turn also owned by such a trust. Or we could get Fullers to operate under a management agreement. I would also like the Rakino service currently run on a limited basis by Pine Harbour Ferries for a very handsome ARTA subsidy to be run as a regular twice a day feeder service to Matiatia and be run by a Waiheke or Rakino-based business.
I am open to ideas and would like Waiheke residents to think seriously about this issue.

Worth your vote, I reckon!
Posted by Hans Versluys No comments:

Another turn of the screw

As expected, Fullers will put up fares from October 1 and is using the Government-mandated GST rise of 2.2% to rack up its fares by 4.7% (for commuters and 40-ride tickets) just because it can, so it does and will do again.
The new fare structure is here.
It's not as if Fullers is short of cash: 2010 has been a bumper year for passenger numbers and it got a $2 million subsidy in Super Gold Cards for which it had to put on no extra sailings or staff. (And over $1.5 million is being paid by Waiheke passengers in wharf taxes going to Auckland City but paying for all the wharves in the region)
Again we are being gouged after several years of increasing fares more rapidly than the CPI, without any accountability or redress in line with its monopolistic position in the market and a feeble regulatory regime. It again is a stark reminder of why we are here and we cannot afford to go away or lie down.

UPDATE 23 September: So far I cannot find on Fullers website any planned changes in fares on Fullers ferry routes other than the Waiheke one. A vindication of a tendered contract perhaps that doesn't allow at-will price hikes on subsidised routes? It would reflect the urgency of taking the Waiheke route into public ownership for the good of all Aucklanders, not just Waihekeans.
Pity the poor students being whacked by a 11.1% in their 10-ride tertiary ticket. But at least their dogs will now ride for free.

UPDATE 24 September: A commenter pointed to Sea Link (the freight and car ferry company) upping its fares too. Return tickets go from $30 to $32 (up 6.6%) and monthly passes from $275 to $290 (up 5.45%). Waiheke Shipping, its rival company on the Half Moon Bay run, is keeping its passenger fares as they were before 1 October.
On the mainland, Maxx has announced a bewildering array of fare changes on buses and trains.
Note that a monthly pass for the Half Moon Bay Fullers ferry service is $95 cheaper than the Waiheke version (for two-thirds the distance travelled - but it is a contracted/tendered/subsidised service)
Posted by Hans Versluys 3 comments:

Fullers: We'll Take You There Out.
Posted by Hans Versluys No comments:

The Campaign for Better Transport, Cycle Action Auckland, Living Streets Aotearoa and Walk Auckland have set up a co-ordinated website covering all aspects of mobility across the new Auckland City: it will quiz the new Council on various projects covering trains, buses, walking, cycling, ferries and cars. You can make suggestions on the projects there and we'll keep an eye on the ferry system proposals.
Posted by Hans Versluys No comments:

There was an interesting letter in the Gulf News this week from a student commuter who was unimpressed with Fullers' gushing apologies and compensation for the commuter hardship experienced last month. It offered a $50 discount on monthly passes for September but forgot to mention in its PR spin that all other tickets and season tickets (including tertiary passes) would be full price as per usual.
No explanation was given by Fullers why only adult monthly passes were discounted. But my guess would be that line of action was basically to shut up FUG members. Divide and rule is still the best tactic for monopolists.
A general fare increase is still on the cards for October, thinly disguised as a Government-mandated GST increase, despite a bumper revenue year (what with the millions in Super Gold Card loot) and cheaper diesel.
Posted by Hans Versluys 3 comments:

Grill the Local Board candidates

Waiheke Radio has created pages to interrogate candidates for this year's Local Board elections. You can leave questions for them to answer, or make even general commentary on their candidacy. Great initiative, so ask them about Waiheke transport!
Posted by Hans Versluys No comments: