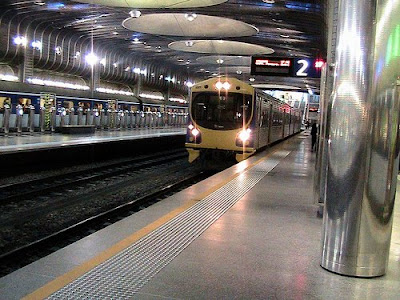 I took a train ride for the first time in Auckland for many years, from the shiny Britomart Station (pictured left) all the way south to Middlemore Hospital. It was just after rush hour (18:26), and the train was surprisingly rather empty, perhaps 20 people in our carriage, which could easily hold 200.
The system (map) has been ramshackle from its origins and for many decades neglected in favour of road building. Lately they are upgrading the network, but it's still diesel locos and narrow in and out to Britomart, which is a major bottleneck preventing an expansion of the number of services into this station. Why do engineers only build for the present and never for the future?
Anyway, a longish tunnel out and then a swing into Parnell up to Newmarket. Quite a long distance, there really should be a Parnell Station for the suburb and a bridge to the university if they ever want to up ridership. The train goes remarkably slow - slower than the London Underground, I reckon. And there is a train conductor too, who collects fares and decides when doors open and close and when the train starts rolling again. Of course, this being un-integrated Auckland, my Fullers monthly pass for ferry and some bus services is certainly not valid on the train. It'll be a good time before we get anything like an Octopus or Oyster card (our version is going to be called "Hop Card" - but don't hold your breath that it will include Waiheke). The fare was $4.10 for about 30-minute ride over 16km. Not a bad fare considering we pay $17.50 for a 40-minute ride over 22km on the ferry - especially since train infrastructure of rails, stations, land, electrification, rolling stock sounds to me more expensive to set up and run than a ferry terminal and a couple of ramshackle boats.

Middlemore Station is very conveniently located when you want to visit the hospital or attend the local schools (we were invited to a Xmas function at King's College). But the other stations like Remuera, Penrose, Westfield or Otahuhu are really in the middle of nowhere, or rather in an industrial wasteland - pointing to the original purpose of the Auckland rail network: goods transport to and from the industrial zones to the port and the hinterland. It was never conceived or designed as a passenger network, and I can't really see how they are going to get the stations closer to homes and businesses where people actually want to travel.
Posted by Hans Versluys 2 comments:

If you're going to town for the day on Fullers, it pays to book your day return ticket online (not available on peak days and certain weekends) because there is s substantial discount on the standard return fare. When you have finished your booking the note at the end of the print out says that tickets need to be picked up before 5pm at Matiatia, but this is actually incorrect. Jim Hannan told my partner that the Matiatia ticket office stays open until 6.30pm. So no rush.
Now if they could tackle the issue of the expensive surcharge on tickets sold on the wharf after that time due to the office being closed.
Posted by Hans Versluys No comments:

Cross-posted from Who Let The Dogs Out:

The un-announced use of the JetRaider on the Waiheke run yesterday (QuickCat on charter) saw the 5:00 sailing leave ten minutes late. The Lass on the tannoy announced that they would be going as fast as possible to make up the time. I guess she forgot to tell the skipper as he dawdled down the harbour at 19 knots. Finally managed to get a beer by Emu point and it was warm. The final result was 18 minutes late in the door. Fullers – Fail.

It apparently got even worse later in the evening when SuperFlyte "lapped" JetRaider and the whole timetable for Friday night went out the porthole.
Posted by Hans Versluys No comments: