Come on Fullers, where's our pay off?

We all remember that breathless and melodramatic press release by Fullers in August last year announcing that due to the eye popping diesel prices, ferry fares needed to rise from $300 to $344. The diesel price was emphasised in their justification to gouge us.

Now that the diesel prices have collapsed over the last three months to levels ($0.97c/litre) seen in August 2005, December 2005 and February 2007, we could be forgiven for thinking that fares could be restored to those contemporary levels too. What is good for Fullers should be after all be good for those customers that keep laying the golden eggs for Infratil.

So, come on, Fullers, the fares should drop to $260 a month if you had any sense of integrity (and were faithful to your own PR spin)
Posted by Hans Versluys 3 comments: 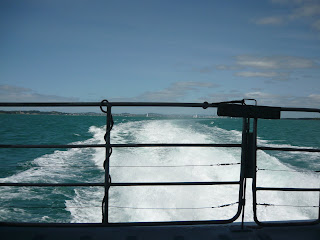 Last week I was left stranded and speechless with two fellow passengers as the 5pm ferry left at 459pm by the Max Electronic Board which shows departures. We were actually there at 458pm. We argued with the guy closing the gate - the ramp was already up - but he insisted that he 'had let three people on already' (a quota of late people??) and that the 'Captain's watch' said it was time to go. In vain did we show him the Max time, the other clock time, and our own timekeeping devices! All this while a crew member who could have let down the ramp was clearly in view. Two of us missed commitments on the island. What was especially galling was that this member of staff (Brian) didn't even apologise, not once.
We decided to fill in the half hour between ferries by filling in synchronised complaint forms. In their reply to my complaint, Fullers say 'they agree that there is an issue with the synchronisation of clocks on the wharf' and 'have in fact just discussed this matter with ARTA'. No apology for the rude member of staff. They do promise that they are working on this 'to ensure that there is a standard departure time our customers can rely on', but no timescale for this is given!
I'd really like to know, too, whether the ramp goes up at the point of departure, or a minute or thirty seconds prior. They need to be absolutely clear about this. Is the last boarding time actually one minute to departure? People could be forgiven for thinking that if the ferry departs at 5pm, they can get there just seconds before. It wouldn't do any harm for Fullers to be completely clear about what their boarding processes are, would it? Of course, this would necessitate seeing things from the point of view of the customer, something that monopolies don't have to do..
Posted by C4FFF member 1 comment:

From the AA press release:

Fuel prices were steadier for the month of February compared to January, with a litre of petrol ultimately ending the month just one cent higher than at the start. According to AA PetrolWatch, 91 octane petrol began the month on $1.63 per litre in the main centres, rising to $1.72, before falling to $1.64. By comparison, diesel prices fell from $1.04 per litre to $1.01, after briefly rising to $1.07 earlier in the month.
AA Senior Policy Analyst Mark Stockdale says “international refined petrol prices stabilised during the month after increasing all through January. Refined prices then began to fall in late February and pump prices followed. However, the size of the pump price drop was diminished by a fall in the New Zealand exchange rate, which then put the brakes on another price reduction.”
“While international refined diesel prices, like crude oil, have remained fairly stable since the start of the year, they also began to fall in late February, which led to the lowest diesel pump price since April 2007.”
The lower diesel prices have seen the gap between diesel and petrol increase to 63 cents, from as little as 27 cents during the peak fuel prices in July 2008.
“Diesel users are currently having a good run from the lower prices, after being badly hit in the pocket last year. Currently, a two-litre diesel car will be saving about $1000 in fuel costs over 14,000 kilometres compared to an equivalent petrol-engined car, or $484 when including the cost of purchasing Road User Charges,” says Mr Stockdale.
According to AA PetrolWatch, this time last year petrol was retailing for $1.75 per litre and diesel $1.29 per litre.

So diesel is down just under 3% in the month. Straight to the Fullers bottom line, again.
Posted by Hans Versluys No comments:

It pays to occasionally look overseas for examples of how other communities tackle their transport problems.
One interesting experiment is the Belgian city of Hasselt (pop. 70,000), whose City Council in 1997 decided to (partly) subsidise bus travel within the city, making it free for residents to use. It's called the zero fare system.
After 11 years of operation, a few national politicians are now demanding a scientific study into the social and economic effects and effectiveness of that system.
The costs are estimated to be "almost 5m euro" (about NZ$12m) a year, borne by the City Council, the regional Flemish Government and national public transport company De Lijn. In cost distribution terms, all Flemish people pay 50 euro cents a year, but Hasselt residents pay 21 euro a year in local tax to pay for the free bus.
The uptake of the free bus system increased 13-fold since 1997, but is in relative terms actually quite limited: only 9.3% of residents use buses for commuting purposes. Other cities without a zero fare system have actually a higher uptake. This is leading to the conclusion that it's not the fare level but the frequency and public transport network density which largely determines whether people will forsake using their cars for commuting.
Posted by Hans Versluys No comments: