Here's a good idea from Paris and Tokyo: Ikea is dressing up metro stations to, apart from promoting its brand, show its furniture is really sturdy and hard-wearing as it can cope with the millions that could potentially use the seats. 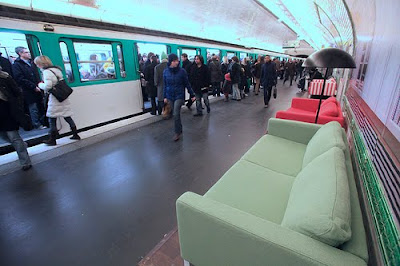 This would be an excellent idea for the local furniture emporiums to follow. Piers 1 and 2 are screaming out for a makeover because the recent terminal upgrades turned out to be draughty and cold disasters, and what were those designers thinking turning the toilet block into the Pier 2 focal point? Even Matiatia could do with a bit of a spruce up and turning into a lounge worthy of seafarers.

Here's what Homebase (a British furniture and furnishings store) did with Carlisle train station. I love the lampshades!

From Go to Whoa

The ARTA is running an online panel survey group for people who use public transport, called From Go to Whoa.
I would recommend you all sign up for it so they can hear a strong Waiheke voice, as they have been a bit deaf in the past.
Posted by Hans Versluys No comments:

Email ThisBlogThis!Share to TwitterShare to FacebookShare to Pinterest
Labels: ARTA

The Super Gold Card scheme for public transport that came in just before the 2008 election was a last gasp attempt by the NZ First Party to capture the oldies' vote, the party's core constituency.
It was a rushed-through subsidy barely given any analysis on costs, take up, benefits and longer term effects on its budget sustainability.
The $72m budget (over 4 years, $18m a year) is in danger of being overrun and isn't sustainable with its current funding. But under pressure from its beneficiaries, the Transport Minister, Steven Joyce, has now recoiled from making any changes to eligibility, subsidy levels or transport system coverage.

The cost of high priced trips, such as the Fullers Waiheke ferry and the Wellington-Wairarapa train, is being blamed for the overrun. Fullers is said to have benefited by $2m alone for the tourist service it provides to the card holders. (It's barely used as a commuter card due to its invalid status during morning peaks).

The NZTA and Ministry of Transport will do the statutorily required review of the scheme:

Among other things, officials will consider:
• the level of reimbursement operators and councils receive
• how "off peak" should be defined
• the eligibility of certain high cost services - including the Waiheke ferry and the train service between Wellington and the Wairarapa

“The transport concession of the SuperGold card has an annual budget of $18 million dollars across the country – $2 million of that is currently spent on the Waiheke ferry alone,” says Mr Joyce.

Cutting the Waiheke ferry and Wairarapa train services from the scheme affects its original intention of including all public transport in areas within the Auckland and Wellington Regional Councils to be eligible for the scheme.
The only fudge that could be made is to re-classify the service as a tourist service instead of a public transport one. Fullers has long been redefining and repositioning the Waiheke ferry run as a tourist service than a public transport lifeline for islanders, including half page adverts in the newspapers and discounted online pre-booked fares for tourists.
On that basis there is an argument to cut out the Waiheke ferry from the scheme: tourism susbidies go against the free market ethos of this government, and if Fullers gets the Government loot, why not the Interislander or the Pahia-Russell ferry service?

The vociferous pensioner campaign to keep the scheme is not surprising, coming from a generation weaned on Government subsidies during their studying and working and now retirement lives. The mindset is one of entitlement and bugger the cost to current taxpayers and wage earners. It has led to a succession of unfunded liabilities in health, superannuation and now in public transport provision, liabilities expected to be borne by the current generation of workers (while paying monopoly rates for the Waiheke ferry service, the cost of their studies, accident compensation, unaffordable house prices and market rents). No wonder the proletariat is pissed off and doesn't care much about free pensioner travel.

But again, the major scandal is still that the Government has failed to negotiate a bulk discounted rate for the Super gold card loot handed to transport providers, plus a requirement that the windfall profits should be shared with other fee paying passengers. Remember, as it stands now, the $2m raked in by Fullers is going straight to the bottom line because the revenue increase was achieved without a cent increase in costs: no extra sailings, new boats and extra staff have been needed during its record Summer this year.
Councillor Denise Roche seems to be on the right track here.
Posted by Hans Versluys No comments:

A tsunami of fares

A friend hopped on the 8:15 from Auckland Sunday to come to the beach races. Fullers decided to wait until the boat had departed before notifying passengers of the tsunami and the beach races were postponed. Profit before people.