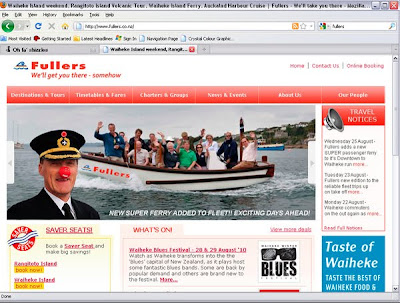 Another Winter of Discontent

Fullers just texted me stating both Superflyte and Quickcat are out of service for the next three weeks and all commuter runs will be done by JetRaider and Starflyte. With the rather painful addendum to the text: "please note limited capacity".
Oh joy, three weeks of choice between the experience of a real live sheep shipment or a packed sardine!

And if you think it feels like groundhog day on the ferries, it is: year after year the same story of breakdowns, incompetence, under-investment and customer gouging.

18 August update: the 8am sailing from Waiheke on the tiny Starflyte left 15 minutes late and had to leave 25 people on the wharf due to lack of on-board space.
Can we suspect Fullers putting up prices by more than 2.5% in October (for the GST rise) to "manage demand" down by upping fares so no more egg will appear on Fullers' faces?

29 August update: A fellow commuter told me the monthly passes for September are $50 cheaper as "compensation" for the inconvenience caused by the boat outages. Fullers have done this before, 4 years ago, only to be rapidly clawed back by the consequent fare rises. I expect something similar to happen this year: any fare rise higher than the GST increase will give you an indication of how quick it will go back to them.

30 August update: The $50 discount for September is only for people who have an August pass, not any other form of ticket such as worker's weeklies, 10 rides or 40 rides.

15 September update: The 5.30pm Waiheke sailing is delayed by 15mins due to an "unplanned maintenance requirement". Why do those Fullers txts always sound so ominously portending of worse things to come?
Posted by Hans Versluys 2 comments:

This morning was one of those Wintry days when fog rolls into the Waitemata Harbour almost without warning. Jet Raider, coming from town ready to make the 8am sailing from Waiheke, had forgotten to bring a fog horn and a crew member capable of interpreting radar data, so Fullers sent an alert text notifying it had done a turnaround and gone back to town. The earliest sailing from Waiheke would be 9am, the laconic tannoy at Matiatia announced. Quickcat eventually left at 9.15am. Cue frantic cellphone calls and text messages from over 300 passengers waiting.

Meanwhile, in Wellington the commuting hordes staged some civil disobedience by refusing to pay their train fare when their ride was cancelled. We are far too civilised on Waiheke to storm Fullers offices and demand a refund. That’s why we pay the highest commuter fares in the country.
Posted by Hans Versluys No comments: