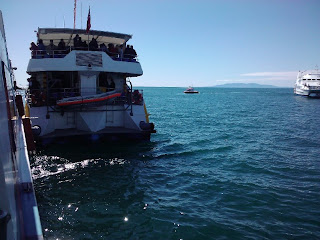 I happened to be on board the Jet Raider on Sunday 11am ex-AKL with 315 other passengers. It was a glorious Spring-like morning with just a whispery breeze on the harbour. In the middle of the Motuihe Channel the vessel came to a shuddering halt, with the loss of all engine power. This was not something I have experienced before, as most other instances of failure I have endured only affected one of the engines. The ship drifted, spun round its axle and the captain came on the tannoy saying there would be another vessel alongside shortly to take us to Waiheke. No mention of the cause of the failure, we had to hear that from another staff member who told a passenger.
Starflyte, and later SuperFlyte plus the Coast Guard, turned up and after some manoeuvering (and the dropping of Jet Raider's anchor about 20 minutes after the stop) evacuation of all passengers could begin. All managed to jump on - I'm not sure what the legal capacity limit of Starflyte is but 316 passengers (and those already on board) made for a packed sailing. 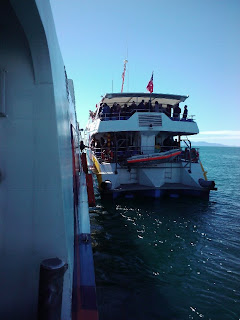 This could have had the potential of a major disaster had the breeze been much stiffer: we drifted towards Motuihe and its reef quite markedly in the balmy conditions. Hell knows what would have happened trying to get everybody off Jet Raider in much more trying circumstances (let alone foundered on rocks). It took about half an hour of orderly evacuation as it was. Imagining we had to get off in a panic is the stuff of nightmares.

I trust the Maritime Safety Authority will have a word about this. Scuttling Jet Raider afterwards was an opportunity missed to get rid of the thing.

August misery par for the course

August turned out to be another miserable month for Fullers. Both Quickcat and Superflyte (barely back from their surveys) have suffered "unplanned maintenance" outages - Fullers-speak for trainee diesel engineers on the minimum wage patching things up with #8 wire. No sign of a September fare discount though. Must be all those (non-monthly pass holder) protesters who didn't get one last time.

From the Northern Advocate:


Barge building is providing one Whangarei engineering firm with a welcome boost to business - and 15 extra jobs. [...] It has also been kept busy lately repairing Auckland's Fullers' ferry fleet.
"There's been a whole schedule of repairs over the last year, one after the other, so it's been good," said [co-owner Glenn] Heape.

A steady stream of returning vessels queuing to get surveyed, serviced and repaired over and over again. It's been a another Winter of Discontent on the Waitemata. And another groundhog day.
But with international oil prices falling to almost 12 month lows, sky high fares and muddling through with overloaded small boats, Fullers carries no risk in providing the profits.
Posted by Hans Versluys No comments:

Thank you, Scott Ewing, for the excellent video. This encapsulates what this blog and campaign for fair ferry fares are all about.
Posted by Hans Versluys 1 comment: