The Old Lady's off sick again

There is always a sense of foreboding when a cellphone text message comes in from Fullers. What sailings will be cancelled, late or replaced? What boats have sunk? Has the Wanderer been hijacked by pirates off Motutapu?
Yesterday it was to say that old lady Quickcat was off for "unplanned maintenance". No indication for how long she will be off or what was wrong with her.
"Unplanned maintenance" is Fullers-speak for a cover-all of all sorts of technical mishaps, and judging by past experience these outages can be quite lengthy.
Posted by Hans Versluys No comments:

A commuter smelled something

On the 8am Waiheke to Auckland sailing on 12 November 2010, Fullers emptied the sewage tanks in the Gulf.
I have been in email contact with Mike Lee who has in no uncertain words told the contact at ARC that the pump out facility was put in at taxpayers' expense in 2005 and Fullers are meant to be using it.
The Harbourmaster pollution officer and Fullers are to be contacted about the matter.

UPDATE: Fullers have come back to ARC and advised that they did not empty the sewage tanks and say that it must be a problem with their venting system and will have to investigate. The intensity was the same as if they were emptying the tanks so they have a problem.
Posted by Hans Versluys No comments:

Email ThisBlogThis!Share to TwitterShare to FacebookShare to Pinterest
Labels: Pollution

And again Waiheke commuters can only look on with envy as they get fleeced by the Matiatia wharf parking tickets vending machines. Waiheke commuters pay for the maintenance of the Bayswater wharf, and now this:

A joint initiative with the Auckland Regional Transport Authority, North Shore City Council, Bayswater Marina and Fullers ferries has opened up free parking at the marina for ferry commuters.
Transport authority customer services general manager Mark Lambert says free carparks for ferry users are available on weekdays.
"Taking the ferry from Bayswater to the city just got easier.
"It's a relaxing journey and it only takes 15 minutes into the city – and now passengers can enjoy the free parking at Bayswater Marina," he says.
Newly elected Devonport-Takapuna Local Board member and Shore councillor Chris Darby says ferry users now have access to 165 carparks at the marina.
He says the transport authority's access agreement with Bayswater Marina will boost efforts to decongest Lake Rd and improve ferry patronage.
"It's a big win for ferry users and is one of the many ingredients of the Devonport Peninsula Travel Plan, a multi-pronged initiative to alleviate congestion on Lake Rd," he says.
Mr Darby says smart solutions like this combined with incremental improvement in other areas compound into making a significant difference.
Spaces are available on a first in, first serve basis.

Email ThisBlogThis!Share to TwitterShare to FacebookShare to Pinterest
Labels: parking 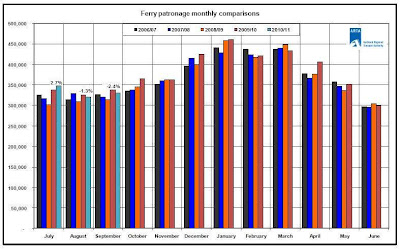 Please check the monthly graph in the report (page 8) for a historical comparison going back 4 years. The Winter months seem to have a bedrock of 300,000 commuter movements a month, topped up by 150,000 tourist movements a month over Summer. But it doesn't seem to vary much year after year. Perhaps the ferry breakdowns over Winter cause the dips, blows softened by fare promotions (but not for everybody).
Posted by Hans Versluys No comments: