Ferry patronage up to March 2011

The monthly patronage figures are out. Spectacular growth in March where in other years the end of Summer sag usually starts. Must be all those oldies going for a free daytrip.
April and May will be more interesting to see the effect of the April price hike. As seen in September last year it can affect passenger numbers drastically. 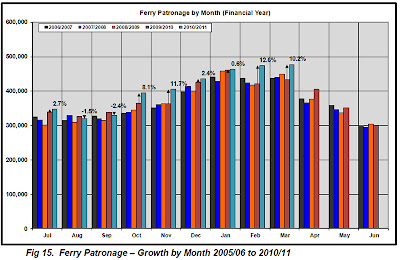 From a passenger: The 6.40am Waiheke to Auckland trip on Superflyte was 10 minutes late arriving in town as there was a breakdown involving one engine this morning.
Some time later there was a text from Fullers saying that the 8am dep from Waiheke was running 20 min late because of a breakdown.
Guess they flogged them over Easter and did not give them the necessary maintenance.

The 8am ex-Auckland was indeed 20 minutes late this morning, they had to swap Superflyte with Jetraider and it tuk-tuk-ed into Auckland by 9am. There were a huge number of prams and parents with children on board, plus a St John's medical emergency, which made embarking and disembarking a laborious and lengthy chore. Everybody was late for work. Not a good look for being the first day of Winter. The Jetraider at least gives you enough time to meditate what your $4,200 a year is actually spent on. (Here is an idea: $861m on Turkish ferry services)
Posted by Hans Versluys No comments:

From a passenger:
Yesterday [13 April 2011] the 4pm sailing got as far as the container wharf and then had to turn back as there was some sort of problem. All the 4pm passengers were squashed on the 5pm sailing which must have been overloaded.
I heard this morning from another 5pm passenger that Fullers gave the 4pm passengers $5 vouchers but she did not know what the vouchers covered.
Posted by Hans Versluys 1 comment:

There has been a record 12.6% increase in ferry patronage in the year on year February figure: 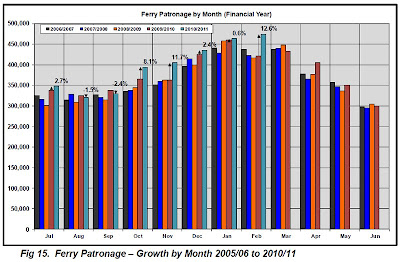 Remember this is the whole ferry system, not just Waiheke, even though we provide the bulk of the patronage. It'll be interesting to see what the effect of the fare rise will be in April's figures. In August/September they went down!
Posted by Hans Versluys No comments:

After prodding the Waiheke Bus Company management about their investigation into the Super Gold Card (SGC) ticket issue to a fare paying passenger Michael Fitchett got back to me:


Yes there has been an investigation into this matter, it has been concluded and the outcome has been reported to AT [Auckland Transport], in fact it was earlier this week that I reported in full to AT. I had also some weeks ago given them a progress update.
Not only did we report the conclusion but we also reported in full how we carried out the investigation. I am however reluctant to allow the findings and knowledge of our investigation methodologies to become public knowledge for a couple of important reasons.
· We wish to protect the identities of innocent people affected.
· Our investigation methods are understandably confidential to us.
· Auckland Transport were the affected party and we don’t think it is our position to speak for them.

But having said that we are happy for you to contact Auckland Transport and ask them for the result of the investigation – they are the Authority and we will be happy with their call on this matter.

So now I have to write to Auckland Transport asking which of the scenarios was true:
- the bus driver pocketed the fare (but the bus company doesn't mind much because it still collects the SGC subsidy from AT)
- the company has a policy of issuing SGC tickets to fare paying passengers (by which defrauding AT)
- the bus driver made a mistake (but the company doesn't really mind because it's not a loss for them, only AT)

And if any of the above scenarios are the case, what is AT's future policy regarding the auditing of SGC ticket issuance?

UPDATE 17 APRIL: Councillor Mike Lee got back to me saying it was a "one-off human error". Which really doesn't negate the pressing issue of the lack of an audit trail in the SGC scheme. I trust the AT management and politicians will get on to that one pronto.
Posted by Hans Versluys No comments: